"The Crisis of Modernity: An Introduction to the Thought of Augusto Del Noce" with Carlo Tuesday, March 19, 2019
*Please note that this is the livestream feed, and not the edited version

Read More about Video: "The Crisis of Modernity"

“How The Federalist Opened the Door to the ‘Antifederalist Appropriation’ of the Constitution” with Jeffrey Tulis (University of Texas at Austin).

Please note that this is the live stream feed, not the edited version.

Read More about Video: "How the Federalist Opened the Door to the 'Antifederalist Appropriation' of the Constitution"

Our own Patrick Deneen spoke on themes from his recent book, Why Liberalism Failed.

"Sex, Morality, and the Constitution: A Conversation on the Founding, Family, and Freedom Today" took place on January 25, 2018.

Talk can also be viewed here.

Read More about Video: "Sex, Morality, and the Constitution"

"Confident Pluralism and the University: Surviving and Thriving through Deep Difference" by John Inazu of Washington University in St. Louis.

Read More about Video: "Confident Pluralism and the University"

The video can also be viewed here.

Author Rod Dreher spoke on the themes of his recent book, "The Benedict Option".

"Are Antidiscrimination Laws Hostile to Freedom or Essential to It?"

You can also watch this talk here.

Read More about Video: "Are Antidiscrimination Laws Hostile to Freedom or Essential to It?"

Click here for Undergraduate Responses to the lecture and Media Coverage of the event.

Video can also be viewed here.

Read More about Video: "What Does Trump’s Election Mean? Free Speech, the Media, and Political Correctness in the Age of Trump"

We recently hosted a panel discussion with:

Read More about Video: “The Future of Liberalism in the Age of Trump”

George Thomas (Claremont McKenna College) presented "Saving America From Itself: The Uneasy Place of Civic Education in America's Colleges," on November 7, 2016, a the University of Notre Dame.

The University of Notre Dame presented, in recognition of Constitution Day 2016, “Washington and Hamilton: The Alliance That Forged America” by Stephen Knott, Professor of National Security Affairs, US Naval War College.

Bradley Birzer, the Russell Amos Kirk Chair in History at Hillsdale College, is a 1990 alumnus of the University of Notre Dame. On April 6, he returned to campus to give a talk about his about his recent book, Russell Kirk: American Conservative.

Yuval Levin, a graduate of the Committee on Social Thought at the University of Chicago, is the founding editor of National Affairs and Hertog Fellow at the Ethics and Public Policy Center. On Tuesday, April 12th, Dr. Levin visited campus to meet with students and faculty and to deliver a public lecture entitled

The Tocqueville Program welcomed Stephen Macedo of Princeton University and Ryan T. Anderson of the Heritage Foundation to campus for a Lincoln-Douglas style debate on the future of marriage, gay rights, and religious freedom. 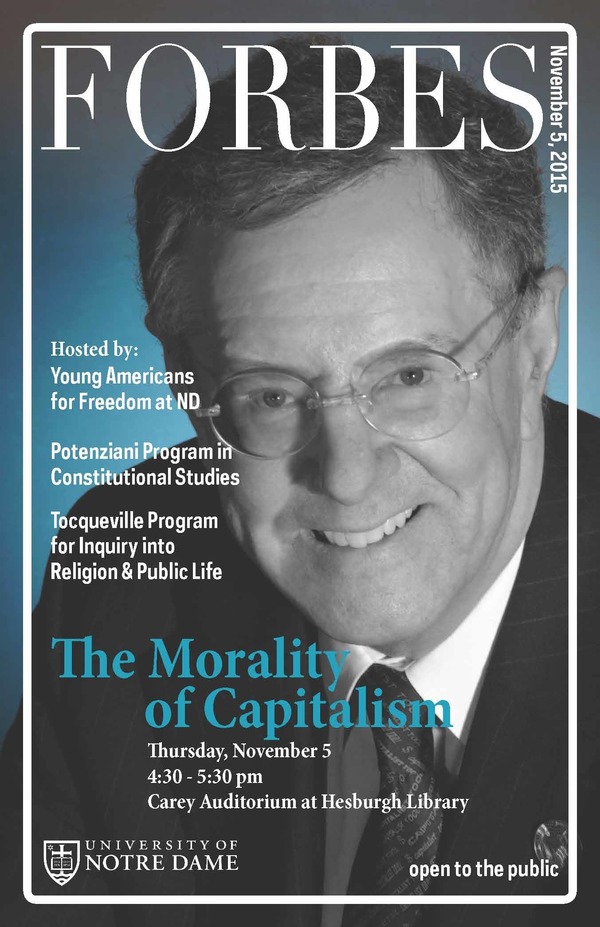 Young Americans for Freedom, the Potenziani Program in Constitutional Studies, and the Tocqueville Program welcomed Steve Forbes to campus. in November.  His talk, "The Morality of Capitalism," drew a crowd of over 350 students!…

You can view the event video here.

January 27, 2015 - Hesburgh Library at the University of Notre Dame

"What is Marriage? A Conversation on the Meaning of Equality, Rights, and the Future of Marriage"

Sherif Girgis - Co-author of What is Marriage? Man and Woman: A Defense, the leading scholarly defense of traditional marriage

Philip K. Howard is a well-known leader of government and legal reform in America. His new book, The Rule of Nobody (W. W. Norton, April 2014), has been praised by Fareed Zakaria as “an utterly compelling and persuasive book that, if followed, could change the way America works.” His Ted Talk has has been viewed by almost 500,000 people. Mr. Howard is also the author of the best-seller The Death of Common Sense (Random House, 1995), The Collapse of the Common Good (Ballantine Books, 2002) and Life Without Lawyers (W. W. Norton, 2009).…

After facing-off with Jon Stewart and giving a Ted Talk with a half-million views, renowned legal expert and best-selling author Philip K. Howard comes to Notre Dame this Thursday to share his vision for simplifying the American legal system to promote the common good.

Read More about Can American Government Be Fixed?

The 2014 University of Notre Dame Constitution Day Lecture will be delivered by James W. Ceaser: "The Constitution as Political Theory"