The University of Notre Dame’s Program in Constitutional Studies has quickly become known on campus for hosting lively discussions and signature events. Recognizing the university’s obligation to teach responsible citizenship and to prepare future leaders with a profound understanding of the principles of the American Constitution, Notre Dame is deepening its commitment to constitutional studies. With the help of multiple substantial gifts, the Program is expanding its faculty, course offerings, student aid, and program of activities. 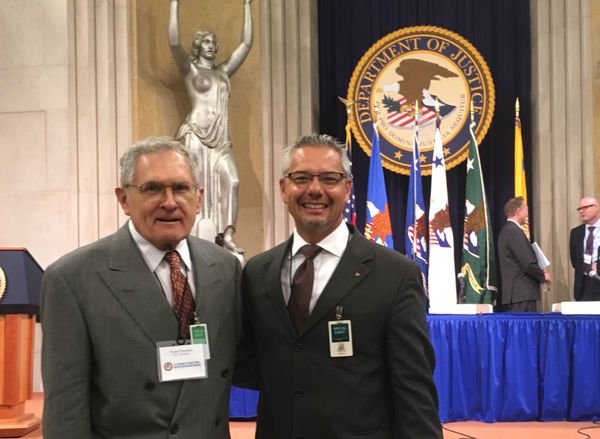 Mr. Frank Potenziani ‘67 and Prof. Phillip Muñoz at the Department of Justice in Washington, D.C. on September 17, 2018. Prof. Muñoz spoke at the Justice Department's forum on “Free Speech and Higher Education."

The family of Mr. Frank Potenziani, ’67, has pledged $3,000,000 gift to endow a senior faculty line in American constitutionalism and the Charles Koch Foundation has awarded the Program $1,500,000 to support its activities. Program director Vincent Phillip Muñoz, moreover, recently secured two major government grants—one a $597,000 from the Department of Education to support Ph.D. students who study the American Constitution and the other a prestigious research grant from the National Endowment for the Humanities to support his own research on the First Amendment.

The added support comes at just the right time. Notre Dame’s undergraduate minor in Constitutional Studies is booming, growing from an initial graduating class of three students in 2012 to forty-two graduates in 2019. Minors study the classics of American constitutionalism, including an intensive study of The Federalist Papers and the speeches of leading American statesmen such as Abraham Lincoln, Frederick Douglass, and Franklin D. Roosevelt.

The Program also supports the Department of Political Science’s efforts to train doctoral students equipped to teach courses and conduct research on the American Constitution, the philosophy of law, international law, and comparative constitutionalism. “Our Ph.D. field in Constitutional Studies is one of the best and most innovative in the country,” says Professor Patrick Deneen, who holds Notre Dame’s David A. Potenziani Memorial Chair in Constitutional Studies. “The field is broader than the traditional focus on ‘public law,’ because we want our students to be grounded in the philosophy and history of the American constitutional tradition, trained in advanced methods of social science, and also knowledgeable about the development of constitutionalism and the rule of law around the world and across borders.” The program’s Ph.D. graduates have been successful in obtaining academic positions at some of the nation’s leading research universities, including tenure-track positions at Arizona State University and post-doctoral fellowships at Princeton.

On campus, the Program is known for hosting spirited lectures and debates among scholars from intellectually diverse perspectives. Recent events include debates on the morality of capitalism, gay rights and non-discrimination law, and immigration policy. The Program does not shy away from controversial topics—not even from President Trump. “While most of academia deplores Trump,” Professor Muñoz says, “we have attempted to foster constructive conversations about what his presidency means and what it portends for the future of American politics.” Indeed, among the Program’s  best attended events was a debate this past fall between Professor Charles Kesler, editor of The Claremont Review of Books and a Trump supporter, and leading “#nevertrump” writer Jonah Goldberg.

The Program is also known for vigorously championing free speech. Professor Muñoz spoke at a forum on “Free Speech and Higher Education” at the Department of Justice at the invitation of Attorney General Jeff Sessions. In his lecture, the professor stated:

The Program recently hosted a lecture by former ACLU president Nadine Strossen on her recent book, Hate: Why We Should Resist It with Free Speech, Not Censorship. Professor Strossen’s lecture was a part of the Program’s initiative on “Free Speech at Notre Dame.” With support from Notre Dame trustee emeritus Ken Stinson, ’64, the initiative has included the development of a new lecture course, “Free Speech and the First Amendment,” taught by Political Science Professor Matthew Hall, a well-attended lecture by Princeton professor Keith Whittington on “Why Universities Must Defend Free Speech,” a faculty-alumni seminar, a faculty debate at the law school on “Is there Space for Safe Spaces in Free Speech?” and two  weekend seminars for ND undergraduates.

In addition to her public lecture, Professor Strossen met with the program’s undergraduate fellows for a private seminar. When asked about her campus visit, she responded glowingly:

I am so impressed by what I observed of the Constitutional Studies program, especially how engaged, informed, thoughtful, curious, and articulate the students are. During our seminar-style discussion over dinner, and in the question-and-answer session after my public presentation, the students asked probing, insightful questions, and they strongly challenged some of my perspectives and conclusions. Our give and take was exactly the kind of robust but respectful dialogue that has become all too rare in today’s hyper-polarized atmosphere, including on too many campuses.

Such seminars are designed for undergraduate Tocqueville Fellows, perhaps the Constitutional Studies Program’s most unique feature. Twenty students, who must apply for the fellowship, are provided a special set of academic programs throughout the academic year. They meet with the Program’s guest speakers for a private seminar, usually over a meal, and participate in weekend discussion colloquia. In the fall of 2018, students met for four sessions over the course of a Friday night and Saturday morning to debate readings on “Free Speech, the University, and the Free Society.” The spring colloquia was devoted to the political thought of Frederick Douglass. “The weekend colloquia are what college is supposed to be,” says Soren Hansen. The senior Program of Liberal Studies major continues: “students from different perspectives read, discuss, and debate common texts about fundamental issues. And the conversation goes on in the dorms long after Professor Muñoz sends us home.” Previous seminar guests include Supreme Court Justice Clarence Thomas, New York Times columnist Ross Douthat, Attorney General Alberto Gonzales, and distinguished academic Mark Lilla.

Tocqueville Fellows are also eligible to receive support for summer internships. For the upcoming summer, the program has provided financial assistance to more than a dozen students, including several who will be interning in the nation’s capital.  “When I was an undergraduate,” says Professor Muñoz, “I couldn’t afford to do an internship in Washington, DC. When I became director of the program, one of my first priorities was to help provide opportunities for financially needy students, who might otherwise have to turn down an unpaid internship or forgo attending a conference because of lack of funds to buy a plane ticket.” The new resources will allow the Constitutional Studies Program to expand the aid it offers to Notre Dame students.

Roge Karma, ’18, was one of the first recipients of a Constitutional Studies summer internship grant.  Karma spent the summer of 2017 interning at the U. S. Embassy in Rabat, Morocco, working alongside career diplomats in the Political and Economic sections of the Embassy. His days were packed with activity: “I drafted reports back to Washington on Moroccan trade-policy with Israel, performed research on Morocco-Gulf Cooperation Council relations in response to the recent Qatar crisis, helped organize a Congressional Delegation visit with the Chairman of the House Appropriations Committee, and helped put together Morocco’s version of the 2017 Human Rights Report,” he said. Karma also attended regular Arabic classes to improve his language ability, which made it easier for him to participate in conferences throughout Morocco on subjects like “Countering Extremism” and “Economic Development.”  According to Karma, “None of this would have been possible without the support of the Constitutional Studies Program.”

Such opportunities would not be possible without the support of benefactors. “The grant from the Charles Koch Foundation along with the government grants and gifts we have received from a number of extraordinarily generous friends helps the Constitutional Studies Program realize its mission of supporting faculty research, teaching the principles of American constitutionalism to Notre Dame students, bringing speakers from a variety of perspectives to campus, and providing opportunities for financially needy students.”

Given its growth and activity, it looks like the Constitutional Studies Program will continue to thrive at the heart of this University’s mission—“God, Country, Notre Dame.”