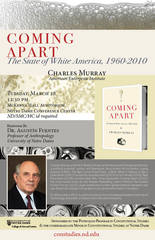 Charles Murray is the W. H. Brady Scholar at the American Enterprise Institute. A political scientist, author, and libertarian, he is known for his books: Losing Ground (1984), The Bell Curve (Free Press, 1994), What It Means to Be a Libertarian (1997), Human Accomplishment (2003), In Our Hands (2006), Real Education (2008), and the New York Times bestseller Coming Apart (2012). His most recent book, By the People: Rebuilding Liberty Without Permission (Crown Forum, 2015), urges Americans to stem governmental overreach and use America’s unique civil society to put government back in its place.

Dr. Murray has Ph.D. in political science from the Massachusetts Institute of Technology and a B.A. in history from Harvard University.

Fuentes examines human evolution from several perspectives, and his research sheds light on some of the most common misconceptions about human nature, specifically in the areas of race, sex and aggression. He is the author of “Evolution of Human Behavior,” which examines how and why humans evolved behaviorally, and “Health, Risk and Adversity,” which provides a comparative approach to the analysis of health disparities and human adaptability and focuses on the pathways that lead to unequal health outcomes.