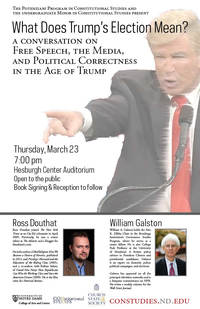 "What Does Trump’s Election Mean? Free Speech, the Media, and Political Correctness in the Age of Trump" will take place at 7pm, with book signing and reception to follow. Please join us at the Hesburgh Center Auditorium for this public event!

The Hesburgh Center is the Kroc/Kellogg building, next to the Eck Visitors Center, at the University of Notre Dame.

Ross Douthat joined The New York Times as an Op-Ed columnist in April 2009. Previously, he was a senior editor at The Atlantic and a blogger for theatlantic.com.

He is the author of Bad Religion: How We Became a Nation of Heretics, published in 2012, and Privilege: Harvard and the Education of the Ruling Class (2005), and a co-author, with Reihan Salam, of Grand New Party: How Republicans Can Win the Working Class and Save the American Dream (2008). He is the film critic for National Review.

William A. Galston holds the Ezra K. Zilkha Chair in the Brookings Institution’s Governance Studies Program, where he serves as a senior fellow. He is also College Park Professor at the University of Maryland. A former policy advisor to President Clinton and presidential candidates, Galston is an expert on domestic policy, political campaigns, and elections.

Galston has appeared on all the principal television networks and is a frequent commentator on NPR.  He writes a weekly column for the Wall Street Journal.