Can Liberty Be Conserved?
by Mark Blitz 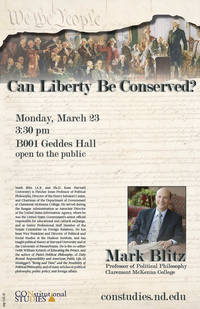 Mark Blitz (A.B. and Ph.D. from Harvard University) is Fletcher Jones Professor of Political Philosophy, Director of the Henry Salvatori Center, and Chairman of the Department of Government at Claremont McKenna College. He served during the Reagan Administration as Associate Director of the United States Information Agency, where he was the United States Government's senior official responsible for educational and cultural exchange, and as Senior Professional Staff Member of the Senate Committee on Foreign Relations. He has been Vice President and Director of Political and Social Studies at the Hudson Institute, and has taught political theory at Harvard University and at the University of Pennsylvania. He is the co-editor (with William Kristol) of Educating the Prince, and the author of Plato's Political Philosophy, of Duty Bound: Responsibility and American Public Life, of Heidegger's "Being and Time" and the Possibility of Political Philosophy, and of many articles on political philosophy, public policy, and foreign affairs.